Shocking!  – Sometimes I choose to not act like a Dominant —gasp!   Double gasp, because I take inspiration for these blogs from my own life.   What you must ask, could I  possibly have done recently, to have me thinking of a submissive side?  There is rarely a time when some aspect of what I am doing, doesn’t cause me to think in terms of being a Dominant. 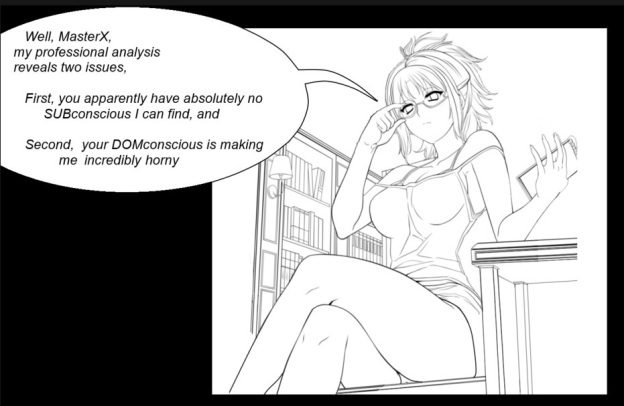 Speaking of inspired – Tonight my slave surprised me with a new dish I had not previously approved.  Chicken Ragout, she tells me.  Rice with a gravy like sauce, big, thick, juicy chicken chunks so tender they reminded me of scallops. Carrots, cooked down until firm but not so much as to be a distraction for the pallet.  A delicious experiment.  A side note for something humorous.   As I raved, she said, “I definitely need to make this more often”. I looked at her sideways, a single eyebrow cocked.  She put her hand over her mouth, finished chewing in a hurried pace, then added: “If you think so of course”.  I grinned and acknowledged it could be added to my “frequently served” list.

Traffic and anger, again – What inspired the title for this blog however was an incident on the highway today.  I was on a two lane highway and the car ahead of me was doing about five under the speed limit.  So I moved into the other lane and started to slowly creep past.

At least I planned to but as I crept up on the other car, he or she sped up.  I went faster they went faster until I was uncomfortable with my speed.  I didn’t need a ticket, for passing a person that was doing five under, but I  sure wasn’t was going to drive the next 20 minutes at five under either.  I’ve seen this too often.  If you drop behind, they go back to the lazy speed they were at before you started to pass.

As soon as I was clear, I got over in front of this person.  There is always someone in the fast lane who has no problem going 10 or 20 over the speed limit and will sit on your bumper to let you know they are in a hurry.. so I try not to act like I own the lane.  If they want to risk the ticket, have at it.  So I pulled over and slowed to just five over the speed limit.  That’s ten more than when I started.  Now the same driver who a moment ago was doing ten less, is right up on my rear bumper.  He-or she- stayed there for about five minutes, then lost the desire to goad me, and dropped back down until they were doing about five under the speed limit and falling far behind.  At this point I slowed back down to the speed limit and they continued to drop behind.

My assumption was that they were now doing the five under they had been, before I tried to go around them.  I don’t get it.  This behavior is not unusual and I don’t understand it.  I want to do a certain speed.  I see cars going faster, and I see cars going slower.  I just want to be able to do the speed I want to do.  I don’t care if a car passes me but its seems to bother some people.

The only thing I can think is, that unconsciously or otherwise, position on the highway is gives some people an over aggravated sense of competition.  They get angry by being passed, and keep that anger, until distracted by something shiny.   I don’t know.   I know that I can be an aggressive driver, to get around people that are going slow in the fast lane and treat it like their personal property.  I can be aggressive when there is little time to pass.  Or when people act like they have no idea what they are doing, or are swerving  and you can’t predict what they will do next.  I need to put some distance between me and some drivers.   Aside from that, I tend to let my secret submissive out and let them have their way.  There is a time and a place for everything, especially on the road.

Speaking of submissive things – my butt should have a tattoo that says “exit only”.  I am well aware that women have two orgasmic spots in the genital area, and men do as well.  We share a lot in common with women, such as this, and erections, and ejaculations.  I am well aware that an old prostitute trick to make a john cum faster is to stick a finger inside and massage the prostrate.   Well, I’m going to do the responsible thing and let a Doctor put a camera where no man or woman has gone before.. yup… its time for another colonoscopy.  Time to ride the silver stallion, a thing I hope to be passed out for.  I get the “control” aspect of doing anal.  I just don’t care to receive.  It’s the responsible thing to do, and since I have people that I would like to stick around for, and not put through watching me die slowly, I just gotta suck it up.   I think more than anything, what I really hate is the day of clear liquids with no foods… By the time the Doc is done, I will have reverted to my caveman alter ego,  be sharpening broom handles, and ready to go slay, roast and eat the first moving, non-human thing I find.

My secret submissive – So yes, I can put the ego in check, and yes I can throttle back on my Dominant side just enough to appear almost submissive, but don’t think for a minute there isn’t a very unhappy animal rattling the cages and wanting out!

That’s image is actually wrong.  If you control anger by locking it up instead of dealing with it and making peace with it, you really have not controlled your anger.  A more accurate picture would be my Dominant side, reclined in my smoking jacket, pipe in hand observing my submissive actions and saying with a smirking smile:  “Very good old boy, but I could have done that sooo much better!”

Tonight we hit FMB for a beating.  Ladies, you may have notice there are certain times when a beating works better and other days when your body makes it harder to get to your head space.   Unfortunately tonight is one of those days, and I’ll need to work a little differently to get my slave into that lovely head space.  Fortunately, I won’t need to be a secret submissive to get the job done.. just a little more attentive.  Carpe Diem my friends!

Check Fet for a local munch